After the end of life dates, support will officially stop, and you will be running at your own risk. While your end of life products will not stop working, but Microsoft will not provide support. What happens after EOL and how will you be effected? Below are the risks are associated with continuing to use these products

· There will be no patches for known problems with the products.

· Microsoft will no longer offer security updates for vulnerabilities identified.

· No longer supported by software companies for use with their applications.

Products that go EOL will be more susceptible to attacks from hackers because they provide easy opportunities. This makes your company vulnerable to cyberattacks and at risk of losing of critical data. With continued use of EOL products, you will experience limited compatibility with new software applications. That means you may not be able to upgrade to newer versions of you payroll, accounting, production, billing or other software.

Waiting to upgrade could result in missing the deadline

The EOL dates will be here before you know it. Get onboard now! With an upgrade of this magnitude you run the risk of missing the deadline due to product shortage. Call us today to make an appointment and let us help you develop a plan! 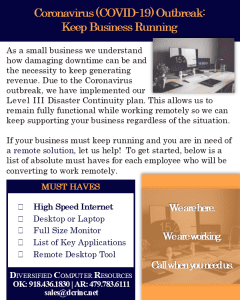